Although comics seem to be a part of my history, during all of 2019 most people would be surprised to know I only followed three comics.  One of those three was the daily observations of a cynical wise cracking hockey loving Cheesie addicted frog named, appropriately, Frog.  Dropping daily on social media, Frog Crisis, created by Hamilton based cartoonist Greg Hyland, became my weekly fix of completely relevant topical humor, filling a void where a $200 a month comic addiction used to be.  Still following the strip today, Frog Crisis became the best comic I was reading that only a few people knew about it.

Best known for his independent comic book Lethargic Lad, Greg Is also a familiar face on the Canadian comic book scene for his work on the ambitious Monster Atlas project, and his work on Lego inspired projects.  In early 2019 Greg decided to challenge himself to try to create a three panel daily strip that would be appropriate for syndication, and borrowing a popular side character from Lethargic Lad, he started his own brand of social commentary via Frog Crisis, which slowly gained a small, but loyal, cult following.

Now, with over three hundred Frog Crisis strips under his belt, Greg is taking the comic to the next level by collecting the strip in a brand new book, 300 Comics About Frogs.  Launching a Kickstarter campaign earlier this month, Greg successfully funded the project within two hours.  However, for the next twenty days readers can continue to pre-order copies of the book, as well as get great extras which continue to grow as Greg meets each stretch goal.

Fast, funny and relevant, Frog Crisis is a look at the world from a uniquely Canadian perspective through the eyes of a cynical Frog with almost no verbal filter.  Whether battling day bats, avoiding Sting, having irrelevant phone chats with Justin Trudeau or dealing with the pandemic, Frog is always up to date and says it like it is.  Oh, and he loves sports…especially hockey.  There is lots of comics about sports.  In fact, I can honestly say that everything I know about hockey I’ve learnt from Frog Crisis.

Greg gets stuck with me about twice a year when I hang out with New York based comic artist Ken Wheaton, who Greg is always seated next too, at two Toronto based comic conventions.  I’m not sure if Greg likes me.  In fact, I’m not sure if he really likes anybody.  But I know that I like what Greg does and he has become one of my favorite cartoonists in the industry which is why I’m supporting Frog Crisis. You put Frog on it, I’m willing to buy it.  I reached out to Greg, who agreed to talk to me about 300 Comics About Frogs.

Sam:  Were you surprised that 300 Comics About Frogs was funded so fast?
Greg: Not really because I kept the funding goal really low.  When you do that you get at least some money.  The money covers everything that you have to buy, so even if I got eight orders I’m getting enough money to cover the printing of eight books and I’m out nothing.  I see all these other people that say “I want eight thousand dollars” and they never hit it, and then they get nothing.  Of course their book is also crud, but that’s not the point.

Sam:  How long has you’ve been doing Frog Crisis?

Greg:  As a comic strip, just a year and a half.  The character of Frog has been around since 1989.  I found my first drawing of Frog that I think I did in my first year of college, and that was in ’89.

Sam:  Do you remember where the idea of Frog first came from?

Greg:  Well, as a character I just liked drawing him.  But then I started drawing him into my comic series, Lethargic Lad.  I had him doing commentary, between the panels, making comments on something, kind of like Sergio Aragones would do in his comics.  Well people kept telling me to ‘Do more Frog. I like the Frog the best.’  So eventually I thought that I wanted to do a daily comic strip and see if I could do a weeks worth.  I picked the frog because I knew I could draw him really quick and it works.  So I did it for a week, and then I wanted to see if I could do it for a month.  I did a month, and now I’m at a year and a half.  I took two weeks off from it last summer, and around Christmas, and I don’t do it on weekends.

Sam:  Because, like Frog says, you can go read Hi and Lois.

Sam:  What’s your beef with Hi and Lois?

Greg:  It’s so lame. So, since I don’t do comics on weekend Frog would go tell people to read Hi and Lois.  But it could be anything.  It could be Marmaduke.  There are just so many things that are lame, but they exist.

Sam:  So will the strips featuring the Hi and Lois panels be included in 300 Comics About Frogs?

Greg:  I mean…..sure.  They’ll never know.  They don’t care.  I’m selling so few of the books that they’ll never notice, but if I sign a syndication deal I’m sure they’ll say I can’t do that.  But I haven’t done one of the Hi and Lois strips in nearly a year anyway.

Sam:  But if the estate of Mort Walker did contact you with a cease and desist that’d be fodder for a strip right there.

Greg:  Of course.  But all through my career, starting with Lethargic Lad, I’ve put things in and nobody has noticed, and in the rare occasion that they did they’ve just said “That’s awesome.”

Sam:  Last year you had some Frog Crisis animation done from students at Mohawk College.  How did that come about?

Greg:  One of the instructors approached me at Hamilton Comic Con and said “Can I use your strips as an assignment and have students pick a Frog Crisis strip and have students animate it.”  So I said “Sure, why not.”  So that got done.  Something else is actually happening right now, but I can’t talk about it.

Sam:  So who is Frog to you?  Is he just an extension of Greg Hyland?

Greg:  Yes.  When I started watching the animation project I liked some of the voices the students did, but somebody said to me “You should be doing the voices.  I read it with your voice in my head.”  People have been telling they think Frog is me.

Sam:  I see so much similarity between you and Frog, especially when the strip turns to the subject of hockey.

Greg:  Well all of those hockey stories are true.

About taxes, or if he has someone’s phone number.

Sam:  On the other end of the spectrum is Frog trying to avoid Sting.  It’s one of the most surreal and funniest ongoing jokes in the strip.  What is up with the Sting sub-plot?  Why Sting?

Greg:  I was trying to come up with a really big celebrity who isn’t nearly as popular as he used to be, but who seems to have a pretty big opinion of himself.    It goes for everybody from that era, but if you look at his videos they are just ridiculous.  Instead of Sting, it could have been Simon Le Bon, but it just happens to be Sting.  I have nothing against him, but it’s just funny.  But also, he calls himself ‘Sting.’

Sam:  I think it’s hilarious how clingy Sting is, and how Frog is just trying to ditch him or pass him off to someone else all the time.  Sting seems so pathetic.  We all have that person in our life.

Sam:  You do keep the strip very relevant, taking on current events almost as they happen.  But one run of strips I thought was really bold is when you were calling out Drake for his inappropriate relationship with young girls.  This is a real problem in our society, but for some reason Drake has been getting a free ride.  I loved that Frog was trying to make Drake accountable for his inappropriate behavior.

Greg:  Frog basically called Drake a child molester, but people don’t say anything about it.  They should.  If Drake was messaging my daughter, who is the about the same age of the girls that he is surrounding himself with, I’d be pretty horrified.  Nobody mentions it, so I feel that I have to keep that story line going.

Sam:  With everything coming out with Harvey WInestein and R. Kelly and Bill Cosby, why do you think people are leaving Drake alone?

Greg:  Because he’s popular and he seems harmless.  I think that’s it.

Sam:  Do you think it’s easier to take on current events through Frog?

Frog Crisis remains to be one of the funniest and socially relevant comic strips being created today.  Filled with up to date topical humor, Greg pokes fun at life and current events as it happens with his own brand of dry wit and cynical mirth.  You can support Frog Crisis monthly via https://www.patreon.com/frogcrisis and visit the 300 Comics about Frogs Kickstarter at https://www.kickstarter.com/projects/monsteratlas2/300-comics-about-frogs.

Oh, and if you heard a rumor that Frog Crisis is coming to Samtweedle.com you heard correctly.  We are just trying to figure out the logistics but expect to see the weekly exploits of Frog right here in this space soon.

Support Canadian artists.  You won’t be sorry.  If you ever took an apathetic glance at Hi and Lois, you’re going to love Frog Crisis! 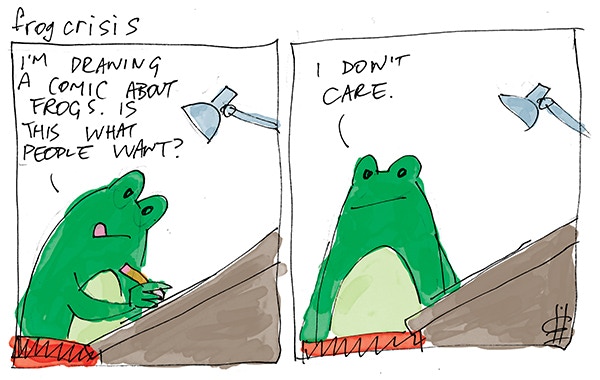