Sam is going to update this with a wonderful anecdote on how he discovered the sharp whit of Greg Hyland and the eventual rabbit hole of 300 strips of Frog Crisis.

Cartoonist, Greg Hyland, first made an animated film named “Frog Crisis” in college in 1991. Since then Frog has appeared in various ways, but Frog Crisis started as a daily on-line comic in 2019. Greg’s best known for his comic book, and on-line comic, Lethargic Lad, but has also worked as an illustrator and storyboard artist for the LEGO Group where he storyboarded countless TV commercials, did preliminary design on some LEGO Star Wars sets and drawing the comics that came with LEGO Batman sets. He has also illustrated several card games for Steve Jackson Games including Munchkin Fu, Burn In Hell, Ninja Burger, and Munchkin Zombies Artist’s Edition.

You can catch Frog Crisis strips here at SamTweedle.com on a regular basis, or head to Greg’s Patreon site HERE or check out his new Kickstarter HERE

And if you are the kind of person that is curious, we are posting Greg’s strips because they are so dang funny. This is not a paid promotion. We just want to spread the Frog love. 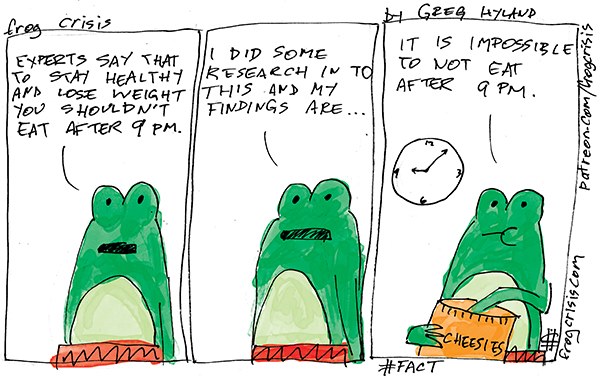